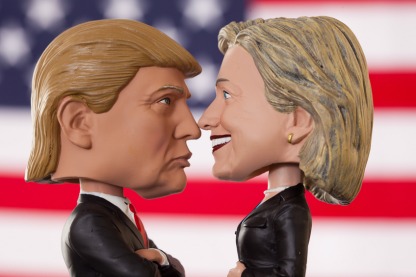 With only a few days until the US Presidential election, most early voters and polls favour Clinton but anything could happen in the final moments. The FBI is once again investigating Clinton’s emails, while Trump continues to broadcast his views of a rigged election as many prominent Republicans distance themselves from him. While a Trump victory represents the greater uncertainty for markets, volatility is likely regardless of the outcome.

How did we get here?

Many political commentators have been surprised by Trump’s popularity, but there are economic reasons behind his rise. Globalisation and deregulation have accelerated since the 1970s and have delivered a significant boost to overall economic activity. But the benefits have not been widely spread, and inequality has risen. While real income of the wealthiest 10% of households has doubled in the US since the early 1980s, it has stagnated for most.

Before the global financial crisis, less affluent households were able to maintain lifestyles by steadily increasing debt. They are now finding it harder to borrow and their frustration has found a voice in the rise of populist politicians. This has been a global trend driving the rise of Nigel Farage (UKIP in the UK), Beppe Grillo (Five Star Movement in Italy), and now Trump in the US.

It’s easy to be caught up in the rhetoric of this election. Locker room talk. Email investigations. A wall between the US and Mexico. A few of the key policies for each candidate are listed below

What does this mean for global growth?

For the most part, Clinton represents the status quo, with expansions of policies like Obamacare. Trump is more of a wild card and prone to statements that create more concern in the global arena. But it is not always a certainty that presidential candidates will pursue the proposals they advocate during the election campaign. A variety of situations can lead them to abandon policies – or simply stand in their way. Congressional and judicial limits to Presidential power frequently act to limit the abilities of Presidents to pursue agendas once in office. Nevertheless, there are a number of potential consequences to think of.

Trump has indicated he would expand infrastructure spending, offer tax cuts for households and firms, and expand the budget deficit to support growth and generate inflation. Note that Clinton is also advocating a significant rise in government spending. Government investment as a share of GDP is currently at its lowest level in over five decades (Chart 2).

Both candidates have expressed concerns over trade agreements and Trump has voiced plans to restrict immigration.

Trump has criticised the US Federal Reserve (Fed) for overly easy monetary policy and has stated he would seek more Congressional oversight of the Fed.

Overall, Trump could significantly increase economic uncertainty, damage trade and raise geopolitical risk. But he may also offer fiscal expansion, reduce taxes and lead a revival of the US manufacturing sector. The combination of these policies may be a boon for US activity in the short run, as foreign goods are replaced by domestically sourced products. But longer term, growth may be impeded by the reversal of globalisation and increased protectionism.

What does this mean for Australia?

The fascination with the ‘dramady’ that is this year’s US Presidential election is more than just entertainment. The US continues to heavily influence global economies and we are also a firm ally. Here are a few things to consider for Australia.

Both Clinton and Trump have said they will review US trade agreements, in particular the Trans-Pacific Partnership which Australia is a signatory to. The US is Australia’s third top export market after China and Japan, representing 7% of export value in 2015 (source: Department of Foreign Affairs and Trade). This is not a massive proportion but may affect some exporters. What is of greater concern is Trump’s desire to place high punitive tariffs on China. Australia is heavily tied to China and any impact to Chinese production is likely to impact on Australia, particularly the resources sector.

Trump’s often abrasive style has alienated many – including many Australian politicians. The NSW State Government even went as far to call him a “revolting slug”, while comments in the Federal sphere range from specific comments on Trump’s behaviour to criticising Trump as a person. Should Trump succeed in the election, these same individuals will need to find a way to work with him – or fail to maintain our previously strong relationship.

Trump’s plan to make allies pay more of their “share” for regional protection, particularly Japan and Korea, could be destabilising for all of Asia and in turn Australia. The Asian region already faces challenges such as the ongoing dispute over the South China Sea. Australia is likely to need to substantially increase its own defense budget without the US, which has flow-on effects to minimising available spend on a range of other government services.

Add to this, Philippine President Duterte’s announcement of a separation from the US in favour of a closer alliance with China and the threats to remove US troops from the country. Pending how far this move goes, this could impact on ASEAN – which will be chaired by President Duterte through 2017.

The fact that Trump has spent considerable time arguing the election is rigged could create a number of issues for the early stages of a Clinton presidency. He has also indicated he may not concede victory to Clinton and it’s difficult to know how his supporters will respond in the wake of such an outcome. A divided America, from a political stand point, is likely to be reflected in volatile investment markets in the US.

The rise of Trump is part of a global trend toward greater political instability. Election outcomes are likely to have much greater impacts on markets, and investors will need to be more aware and manage those risks, as we will do in our portfolios. Either outcome has the potential to see some short-term volatility in investment markets, but there is a large range for potential longer term consequences, particularly in the case of a Trump presidency.

This document has been created by Westpac Financial Services Limited (ABN 20 000 241 127, AFSL 233716). It provides an overview or summary only and it should not be considered a comprehensive statement on any matter or relied upon as such. This information has been prepared without taking account of your objectives, financial situation or needs. Because of this, you should, before acting on this information, consider its appropriateness, having regard to your objectives, financial situation and needs. Projections given above are predicative in character. Whilst every effort has been taken to ensure that the assumptions on which the projections are based are reasonable, the projections may be based on incorrect assumptions or may not take into account known or unknown risks and uncertainties. The results ultimately achieved may differ materially from these projections. Information in this document that has been provided by third parties has not been independently verified and Westpac Financial Services Limited is not in any way responsible for such information.